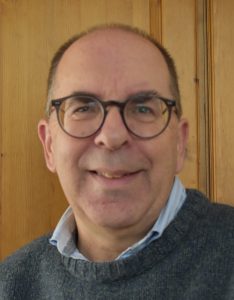 Over the years, Richard has written many articles, book reviews and numerous other ways of crafting and enjoying words. In recent times, much to his surprise, he has found some of these words to be published in books. And even more surprising, was when Lockdown periods resulted in writing fiction too. He writes a blog and can be found on Twitter and other social media.

In his paid employment career, he helped people to find or remain in work and specialised in supporting people with mental health conditions. He also developed and led an international ground-breaking initiative helping employers to support staff experiencing mental ill health. Richard moved on from this work in December 2018 to begin the next stage of life (some call this ‘retirement’).

Showing how it’s never too late to learn, having failed A-levels at school, he passed his driving test at the age of 38 and 15 years later, gained an MSc Vocational Rehabilitation. Richard was appointed MBE in the Queen’s Birthday Honours 2018 for services to mental health.

Married to Jane, who is a vicar, they live in Devon with Daisy, a cocker spaniel, and have two adult children. Richard is also a licensed lay minister.